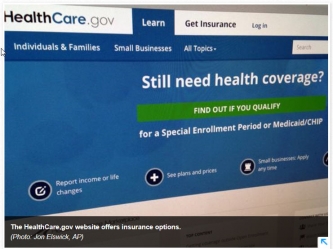 WASHINGTON — About 1 million out of the more than 3.7 million people who logged into HealthCare.gov during the first week of open enrollment submitted applications, the Department of Health and Human Services said Wednesday.

Nearly a half-million of those selected plans.

HHS Secretary Sylvia Mathews Burwell called the first week's statistics a "solid start" but noted the government has "a lot of work to do every day between now and Feb. 15," the end of the open enrollment period. A week after the agency came under fire for misstating enrollment figures by including those who signed up for dental plans, Burwell said, "Those numbers have been checked and do not include dental."

Almost half — 48% — of those who chose plans were uninsured, Burwell said. One of the administration's goals during the three-month open enrollment period is to reduce the number of people without insurance. Another goal is encouraging those with insurance to shop around for better deals.

"The fact that a substantial number of people were able to get on HealthCare.gov and pick a plan in the first week shows that the systems are working," said Larry Levitt, senior vice president at the Kaiser Family Foundation. "That's a big deal when you consider what a mess it all was last fall."

The Regency organization has become synonymous with the best in senior healthcare and has garnered a well deserved reputation for its unsurpassed commitment to its patients and residents.

The Regency Nursing and Rehabilitation Centers and Facilities throughout New Jersey have achieved numerous industry ‘gold standard’ benchmarks and have received accolades from all corners of the HealthCare community.

More in this category: « Regency Nursing Offers AARP Driving Courses! The Widening World Of Wearable Technology For The Health Conscious »

Make sure you enter the (*) required information where indicated.
Basic HTML code is allowed.